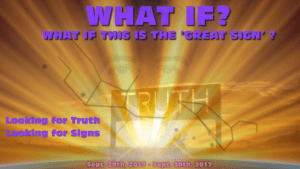 A summary of what I find to be most interesting about the latest “Jesus is Coming Back Soon” movement. I can’t help it, I’m fascinated by this stuff.

It’s challenging to accurately define this phenomenon of excitement and controversy which surrounds an upcoming astronomical alignment that involves the Sun, Moon, and Stars. Is it a movement? I don’t like that choice of word, but I’m unable to think of a better word to describe it.

Here is a bullet list of what makes this so different from the list of other failed predictions of when Jesus would be returning.

1. There is no one church promoting the idea that the upcoming astronomical alignment on 9/23/2017 matches a literal reading of Revelation 12:1-2

2. The alignment does happen on Feast of Trumpets, which is the ‘appointed time’ or ‘holy feast day’ most commonly associated with the Rapture of the Church. Jesus is a Jew. The Jews observe the beginning of the new day at Sunset, not Sunrise. Feast of Trumpets is celebrated for two days. From sunset 9/21 to sunset 9/23 equals two days. The alignment is happening all day on 9/23.

3. There is no single charismatic teacher or leader or 'prophet' who is responsible for the narrative surrounding the Revelation 12 Sign which has developed over the course of the last three or four years.

4. Unlike all other ‘predictions’, this was not derived by someone’s unique method of calculation using Biblical dates and date spans.

5. The alignment of the Sun, Moon and Stars on this date has been pre-determined since Creation.

6. The ability for the everyday people like you and me to even know that this alignment would be happening on this date has only been around for a little more than 10 years, due in large part to the Internet developing into a global distribution channel for not just ideas and information, but for amazing tools like the Stellarium astronomy software. Knowledge has increased.

7. Despite what some critics say, this has nothing to do with Astrology which is fortune telling, it’s more accurately defined as Biblical Astronomy which is supported by over a hundred verses from the Bible, but most people don’t read the Bible often enough to know that, and it is a rather thick book so it takes a determined effort to pull information on a specific topic. Thanks again to tools on the Internet like BlueLetterBible.org it’s much easier than it used to be. Knowledge has increased.

8. The topic is incredibly divisive. For many people, it is too difficult a thing to objectively investigate the claims and not allow their emotions to influence their opinions. This only peaks my curiosity in the matter that much more.

9. Despite what some critics say, there hasn’t been an astronomical alignment as similar to this one since August 5th, -3915 B.C. … that’s almost 6,000 years ago, so yes, you could say it’s pretty rare.

10. The symbolism attributed to the elements of this alignment is rather amazing.

a. Virgo the Virgin is the first sign in the Mazzaroth (the Biblical equivalent of the zodiac); so Virgo is the Alef or the Alpha in the Mazzaroth. Jesus came into the world through Mary, the Blessed Virgin.

c. The planet Jupiter is known by many cultures as ‘The King Planet’.

d. The Hebrew name for the planet Jupiter is ‘Tzedek’ which means ‘Righteousness’

e. The physical appearance of Tzedeq or Jupiter matches Isaiah 53; stripes, a pierced side, and even a crown of thorns as represented by the aurora borealis electrical storm.

f. Beginning in November of 2016, Tzedeq or Jupiter went into retrograde within Virgo’s womb area for a period of a total of 9 months, 2 weeks and 6 days before beginning to exit from between her legs on 9/10/2017 . This period of time is equivalent to normal gestation for a human child. Retrograde is an astronomy term used to describe the apparent back and forth movement of a planet when it appears to not be continuing it’s path across the sky.

g. The brightest star in the constellation Leo is named Regulus, which means ‘The King Maker’, and was part of a conjunction on Sept. 11th, 3 B.C. involving Jupiter which would have made for the brightest object ever seen in the night skies. Bethlehem Star anybody?

i. Jesus described Himself as “The Bright Morning Star” in Revelation 22:16. The planet Venus is known as ‘the morning star’. On September 23, the day begins with Venus rising above the eastern horizon before sunrise in the constellation Leo, leading the way for the rest of the Revelation 12 Sign alignment until sunset, as the day changes from today to tomorrow. No one knows the day or the hour.

11. On the Jewish calendar, this is the year 5777. It is common practice to drop the first number as a form of shorthand, so it’s the year 777, which is considered to be God’s number, or perfection times 3. The Jewish new year happens on Rosh Hashanah, which coincides with Feast of Trumpets,

12. The Blood Moons. I won’t go into detail in this article…but a connection has been made between the interval of days between each Blood Moon and 09/23/2017 that defies all probabilities.

13. Incidental Date Spans : I won’t go into detail in this article …but after the discovery of the Revelation 12 Sign, date spans of 120, 100, 70, and 50 years exactly have been identified as being related to how a Biblical generation is defined, and Jubilee years.

14. A new corporate ‘born again’ theory …I won’t go into detail in this article, but a new view of what it means for the corporate Church (the body) to be ‘born again’ has developed which makes a lot of sense.

15. Take a look at how Isaiah 66 dovetails with the depiction of the woman giving birth in Revelation 12… how unusual that the woman gives birth BEFORE her labor pains (Tribulation). Who has ever heard of such a thing? This verse is being looked at in a new way, as a picture of the Church being born from Israel before the Tribulation begins. Focus on the word ‘goyim’ in the original Hebrew. Who are the goyim? Aren't they everybody but the Jews?

16. Hark the herald angels sing’ song > Note to self… revisit these lyrics in light of the Revelation 12 narrative, there appears to be something interesting here. "Glory to the newborn King! (Glory: Psalm 19)

In summary, here’s where I still stand on the Revelation 12 Sign:

Q: Will the Church be Raptured on or around that day?
A: I really don’t know.

Q: Is this Revelation 12 stuff really worthy of so much attention?
A: Because of how different it is, I think it’s worth serious, objective consideration.

Q: Is it possible Sept. 23rd will come and go and nothing at all will happen?
A: Yes … but "What if… What if they are right this time?"

Because that day is coming and it's closer than it ever has been.