You are here: Home / Archives for evil 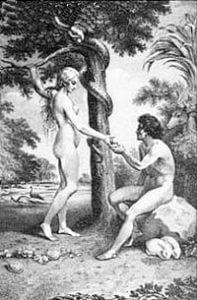 Romans 16:20
The God of peace will soon crush Satan under your feet. The grace of our Lord Jesus be with you.

Genesis 3:5
“For God knows that when you eat of it your eyes will be opened, and Homeyou will be like God, knowing good and evil.”

Genesis 3:13
Then the LORD God said to the woman, “What is this you have done?” The woman said, “The serpent deceived me, and I ate.”

Genesis 3:14-15
So the LORD God said to the serpent,
“Because you have done this, “Cursed are you above all the livestock and all the wild animals!
You will crawl on your belly and you will eat dust all the days of your life. And I will put enmity between you and the woman, and between your offspring and hers;
he will crush your head, and you will strike his heel.” 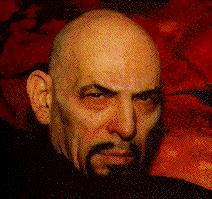 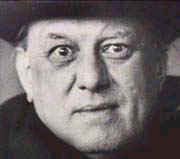 The originators of Satanism are primarily Aleister Crowley (1875-1947) who combined occult magic, drug use, and sexual aberrations into a system with one rule, “Do whatever you want” and Anton LaVey (1930-1997 ) who published The Satanic Bible in 1969 and who also started ‘The Church of Satan’ in the same decade. LaVey and his followers are secular humanists for whom Satan is a symbol of the power of the self and their rejection of Christianity. Do either of these men look like someone you’d feel comfortable enough with to invite to spend the night in your guestroom? 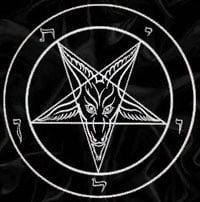 The Baphomet or Satanic pentagram is pointed downward to accomodate the outline of a goat’s head.

The Beast sits atop the world. The moons may also suggest that this is the Prince of Darkness. The moon is also an accurate metaphor for Satan, masquerading as a ‘source of light’ it can only reflect the true light down upon those living in darkness, and it pales in comparison.

The relatively modern trend of removing God from our Government, Courthouse, school rooms, etc. under the Constitutional moniker of ‘Separation of Church and State’ is unquestionably in alignment with the tenets of Satanism since Satanists proudly proclaim that they “Pledge Allegiance to NO God”

2 Corinthians 11:3
But I am afraid that just as Eve was deceived by the serpent’s cunning, your minds may somehow be led astray from your sincere and pure devotion to Christ.

Revelation 12:9
The great dragon was hurled down–that ancient serpent called the devil, or Satan, who leads the whole world astray. He was hurled to the earth, and his angels with him.

Revelation 20:2
He seized the dragon, that ancient serpent, who is the devil, or Satan, and bound him for a thousand years.
So the End has already been written and can NOT be changed. Satan will be sent to Hell with his demons. Why anyone would choose to align themselves with a loser is beyond me.

C.S. Lewis. In The Screwtape Letters Lewis noted that people often either dismiss as mere nonsense the devil’s existence and interaction with mankind, or they believe but have an excessive interest in him (either of which error delights the devil immensely)….

Here is an article titled ‘The Many Faces of Satanism’ by Craig S. Hawkins, published in Forward Magazine in 1986 (now known as The Christian Research Journal ) that I’d recommned reading if you’re interested.

John 8:44
You belong to your father, the devil, and you want to carry out your father’s desire. He was a murderer from the beginning, not holding to the truth, for there is no truth in him. When he lies, he speaks his native language, for he is a liar and the father of lies.

And it came to pass, that, as he was praying in a certain place, when he ceased, one of his disciples asked him, Lord, teach us to pray, as John also taught his disciples. And he said to them, When you pray, say,

Our Father in heaven, Hallowed be your name.
Your kingdom come.
Your will be done on earth as it is in heaven.
Give us this day our daily bread.
And forgive us our sins; as we forgive those who sin against us.
And lead us not into temptation; but deliver us from evil

When the Son of Man comes in his glory, and all the angels with him, he will sit on his throne in heavenly glory. All the nations will be gathered before him, and he will separate the people one from another as a shepherd separates the sheep from the goats. He will put the sheep on his right and the goats on his left.

“Then the King will say to those on his right, ‘Come, you who are blessed by my Father; take your inheritance, the kingdom prepared for you since the creation of the world. For I was hungry and you gave me something to eat, I was thirsty and you gave me something to drink, I was a stranger and you invited me in, I needed clothes and you clothed me, I was sick and you looked after me, I was in prison and you came to visit me.’

“The King will reply, ‘I tell you the truth, whatever you did for one of the least of these brothers of mine, you did for me.’
“Then he will say to those on his left, ‘Depart from me, you who are cursed, into the eternal fire prepared for the devil and his angels. For I was hungry and you gave me nothing to eat, I was thirsty and you gave me nothing to drink, I was a stranger and you did not invite me in, I needed clothes and you did not clothe me, I was sick and in prison and you did not look after me.’

“They also will answer, ‘Lord, when did we see you hungry or thirsty or a stranger or needing clothes or sick or in prison, and did not help you?’