You are here: Home / Archives for socialism 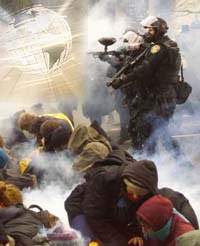 So the war has begun. As of this moment it is still unclear whether or not Saddam Hussein was injured or killed during the initial attack. Despite almost a dozen American casualties it seems that this war has been too easy so far, which is rather disconcerting. In the end if we were to lose only 5% of our combat troops that would amount to 2,000 lives. Hardly insignifcant. God loves each of them. Here at home and all across the world in major cities people are protesting against the war, againt the Bush administration and against everything that America stands for.

Many of these people whose stale motto is “Give Peace a Chance” have no idea that the promoters of the largest organized protests are actually funded by enemies of the United States…they either don’t know or they don’t care. The World Worker’s Party, a communist organization, has been on of the largest sponsors of the catchy “Not in My Name” protests. Clearly there is something going on here thats on more of a spiritual level. I’m sure the battle is raging in the heavenlies. Many people are wondering if Armageddon is about to happen. Nobody can really say just yet, but it is going to happen, thats as sure as the Second Coming of Christ and the Rapture of His church before the Second Coming. It doesn’t take much of an imagination to see the equivalent of a World War starting soon when you consider the complexities of having to deal with Turkey, Iran, Russia, North Korea and China all at the same time. There will be wars and rumors of wars…

1 Peter 3:12-15
For the eyes of the Lord are on the righteous
and his ears are attentive to their prayer,
but the face of the Lord is against those who do evil.” Who is going to harm you if you are eager to do good? But even if you should suffer for what is right, you are blessed. “Do not fear what they fear; do not be frightened.” But in your hearts set apart Christ as Lord.

Are you ready? If Christ were to return tonight while you are in your bed, would you be ready?

These are only a few exceprts from the Congressional Record by: