You are here: Home / Archives for hunter moon 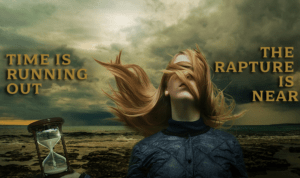 Skeletons at the Banquet Table

I went to a family wedding yesterday that had an unusual theme.  Being that it’s October, the overarching theme was Halloween, but more specifically, many of the decorations were directly from Tim Burton’s animated musical dark fantasy film titled ‘Corpse Bride’.

At the wedding banquet table, there were a pair of lifesize skeletons, dressed as the bride and the groom, saving the newlywed’s seats.

I’m undecided about how transparent I should be in sharing my thoughts and feelings about the significance of the symbolism behind the couple’s choice of theme and decorations.

First, I’m saddened that the first wedding two of my preteen sons ever attended was decorated like this. 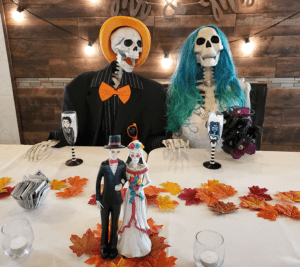 A wedding is the joining together of one man with one woman, the groom and the bride, both created in the image of Jesus our Creator.  The true significance of a wedding is of Jesus as the groom who is joining with his bride, the Church, for all eternity. It is both a covenant and a celebration of hope, joy, purity, holiness, life, and love.

Truth be told, the symbolism of Halloween and skeletons represent a celebration of evil spirits and death, sadness, loss and grieving, ugliness and that which is ‘filthy’ or ‘unclean’.

The officiant of the ceremony was a friend of the bride and groom. When he finished with his part a guest pastor was called up to deliver an obligatory 30-second prayer to close the ceremony.

No Bible verses. No communion. No cross. No mention of the name of Jesus.

I’m saddened and bothered.  It seems that this couple places more importance on having fun and worldly entertainment than on the sanctity of marriage.

I’m not mad at them, I can’t be.  Also, I don’t believe they intended to make a mockery of what a wedding is supposed to represent.  Yet they freely chose to make the event their own and knew what they didn’t want it to represent.

They may sincerely believe that they are serious about each other and their public commitment to each other, but it’s hard for me to take them seriously.  Their choices are more along the lines of what I would expect from unsupervised children tasked with planning an important event for adults.  For some reason, the book ‘The Lord of the Flies’ comes to mind.

Their farcical wedding is a commentary on the Last Generation.  Choosing death over life.  Choosing the corruption of this world over God and the promises of indescribable goodness that he has waiting in Heaven for those who love him.

They chose themes tied to the Prince of Darkness rather than the Prince of Peace, the Light who came into this world, who darkness flees from.  No doubt, while planning their wedding there was much laughter, hilarity, and a mindset that ‘Life is just a party’.

On our way to the wedding, while driving through the country, the sun was beginning to set.  There were vineyards, orchards, and fields of grain on both sides of the highway.

Half of the grapes in the vineyards had already been harvested.  Fallen apples were covering the ground in the orchards.

Grapes and apples are harvested around the time of Succot, a seven or eight-day Jewish feast that is also known as the Feast of Tabernacles, which happens to begin today, October 13th.

In the Bible, grapes represent the non-believers, grain represents the Church, and Sukkot is when the last grain is brought into the barn.

There is a time spoken of in Romans 11:25, a time that is quickly approaching when the “fullness of the gentiles comes in”.

I do not want you to be ignorant of this mystery, brothers and sisters, so that you may not be conceited: Israel has experienced a hardening in part until the full number of the Gentiles has come in, and in this way, all Israel will be saved. As it is written:

“The deliverer will come from Zion; he will turn godlessness away from Jacob.
And this is my covenant with them when I take away their sins.”

This is just a thought, not a prediction.

Concerning the coming of our Lord Jesus Christ and our being gathered to him, we ask you, brothers and sisters,  not to become easily unsettled or alarmed by the teaching allegedly from us—whether by a prophecy or by word of mouth or by letter—asserting that the day of the Lord has already come.
– 2 Thessalonians 2:1-2

The time is near.  If you haven’t yet accepted the gift of forgiveness for all of your sins and wrongdoings, an undeserved gift that can only come from the King by believing that Jesus/Yeshua is God, God who came down from Heaven, born as a male child, who lived a sinless life, taking the penalty for your sins upon himself before he died on the cross, and then rose from the dead three days later, conquering Satan and death for once and for all …then you better start believing.  He can come back at any moment now.

There is an hourglass that was turned over a long time ago, and the very last few grains of sand are slipping away.  A couple of thousand years may seem like a long time to us humans, but to God, it is as if only a couple of days have passed.

When time is up, it’ll be too late to join the Bride who God is coming to take away from this fallen world and up to Heaven before his wrath is poured out upon the planet, like never before.

No matter what wrong you’ve done… God is faithful to forgive you and restore you, and welcome you like a loving father into his arms.  He’s waiting.  Jesus/Yeshua said,

“Therefore keep watch, because you do not know on what day your Lord will come. But understand this: If the owner of the house had known at what time of night the thief was coming, he would have kept watch and would not have let his house be broken into. So you also must be ready, because the Son of Man will come at an hour when you do not expect him.
Matthew 24:36-44

Jesus is the Son of Man.  Jesus’ original name in Hebrew is Yeshua. The literal meaning of ‘Yeshua’ is ‘salvation’.
If you want to know Truth, then in your heart, in your mind, call out to him, “Jesus Save Me!” and doors will open.