You are here: Home / Archives for magic

Deuteronomy 18:10-11
“There shall not be found among you anyone who makes his son or his daughter pass through the fire, one who uses divination, one who practices witchcraft, or one who interprets omens, or a sorcerer, or one who casts a spell, or a medium, or a spiritist, or one who calls up the dead.”

The roots of the Ouija board can be traced to the mid-19th century when a Spiritualist craze was sweeping throughout New York City as well as Europe. The concept of Spiritualism allowed that living people could communicate with the spirits of dead people. Those wanting an audience with a dearly departed family member of friend would seek out a Spirtualist to act as a medium between the two worlds. The “medium” would speak for the ghostly spirit, providing guidance, advise and sometimes warnings. Charles Kennard, Elijah Bond and E.C. Reiche are credited with developing the Ouija Board. Kennard said that the term Ouija is an Egyptian expression for good luck and that he was told the name by the board itself. Eventually, William Fuld took over the company after Kennard lost his riches. William Fuld was on the roof of his factory in Baltimore to supervise the replacement of a flagpole when he fell to his death. Witnesses said it appeared to be an accident but since fiction is often times more interesting than truth, people began spreading rumors that Fuld committed suicide and that he was posessed by the Ouija Board’s spirit.

Playing with a Ouija Board is not a harmless, innocent game. The Spirit world is very real and some doors should never, never be opened. It is not possible to communicate with the spirits of dead people, but clever, powerful, deceptive demons have succeeded in convincing many people that it is. God is very clear about these matters.

You’d Do Best to Stay Away from:

I Timothy 4:1
The Spirit clearly says that in later times some will abandon the faith and follow deceiving spirits and things taught by demons.

Remember that in Genesis 3, Eve, who was totally innocent, was deceived by the serpent who is the Devil. To this very day the world is still suffering from the consequences of Eve being deceived by the serpent. But Jesus paid for this sin by dying on the cross. Jesus is coming back soon to make things right and to restore the world to the state of perfection that God always intended.

John 8:44
You belong to your father, the devil, and you want to carry out your father’s desire. He was a murderer from the beginning, not holding to the truth, for there is no truth in him. When he lies, he speaks his native language, for he is a liar and the father of lies.

1 John 4
Dear friends, do not believe every spirit, but test the spirits to see whether they are from God, because many false prophets have gone out into the world.

Rev. 12:12
But woe to the earth and the sea, because the devil has gone down to you! He is filled with fury, because he knows that his time is short.

Deuteronomy 13:1-5
If a prophet, or one who foretells by dreams, appears among you and announces to you a miraculous sign or wonder, 2 and if the sign or wonder of which he has spoken takes place, and he says, “Let us follow other gods” (gods you have not known) “and let us worship them,” 3 you must not listen to the words of that prophet or dreamer. The LORD your God is testing you to find out whether you love him with all your heart and with all your soul. 4 It is the LORD your God you must follow, and him you must revere. Keep his commands and obey him; serve him and hold fast to him. 5 That prophet or dreamer must be put to death, because he preached rebellion against the LORD your God, who brought you out of Egypt and redeemed you from the land of slavery; he has tried to turn you from the way the LORD your God commanded you to follow. You must purge the evil from among you.

Following the Sept. 11, 2001 attack on New York and the Pentagon, Nostradamus became one of the most popular searched words on the Internet. Claims were widely made that Nostradamus, a 16th century French astrologer and physician, had predicted the World Trade Center attacks. Other claims attributed to Nostradamus include:

Christians must not accept any prophecy of Nostradamus as being legitimate, no matter how compelling, on the grounds that he was an astrologer and many of his so-called prophecies failed. Christians should avoid being enticed by a desire to know the future apart from what God’s Word tells us.

Romans 1:18-25
The wrath of God is being revealed from heaven against all the godlessness and wickedness of men who suppress the truth by their wickedness, 19since what may be known about God is plain to them, because God has made it plain to them.For since the creation of the world God’s invisible qualities–his eternal power and divine nature–have been clearly seen, being understood from what has been made, so that men are without excuse.
For although they knew God, they neither glorified him as God nor gave thanks to him, but their thinking became futile and their foolish hearts were darkened. Although they claimed to be wise, they became fools and exchanged the glory of the immortal God for images made to look like mortal man and birds and animals and reptiles.
Therefore God gave them over in the sinful desires of their hearts to sexual impurity for the degrading of their bodies with one another. They exchanged the truth of God for a lie, and worshiped and served created things rather than the Creator–who is forever praised. Amen.

Those who follow Wicca or call themselves Pagans are essentially nature worshipers who believe in a dual god /goddess system. They worship creation rather than the Creator. But there is much more to it. Wiccans say they practice ‘white magick’ preferring to spell magic with a ‘k’ at the end to emphasize that wiccan magic is different and meant for ‘good’. When you look at the long list of similarities between Wicca and Satanism you’ll see irony in their insistance that they ‘do not worship the Devil’ and ‘do not even believe that the Devil exists’ . Here are just a few:

Worshiping anything or anyone other than the Lord is called ‘idolatry’.

There are only two kinds of Wiccans;

The truth is that Wicca does not predate the worship of God, it developed as opposition to God.

The Harry Potter series of books and movies by British author J.K. Rowling depict the adventures of a young boy on his path of becoming a witch. The stories are full of magic, witches, wizards, spells, ghosts, poltergeists, and much more that Christians associate with ‘the Occult’. The global phenomenon of how successful and popular these books and movies have become is unprecedented. Even amongst Christians opinions on whether children should be allowed to see the movies or read the books can range from:

“Its just a story about good and evil, so wheres the harm in it?”

“This is dangerous because it encourages an interest in learning about the occult.”

No one can argue that God hasn’t made it abundantly clear that we are to have NOTHING to do with anything occultic, but you might say, “this is just entertainment, it’s not real”, to which I’d like to point out that J.K. Rowling did her homework, the content is actually very real in terms of the symbolism, incantations, and I believe may even include the names of demons. Keep in mind that in a movie like Harry Potter there are no accidents, every scene, every set, every prop, every symbol was intentionally and thoughfully included. Nothing is by chance.

I can think of no good reason to willingly expose ones mind and spirit to the ugliness and evil which these films glorify for the sake of money. Why not just go swimming in a sewer instead?

Q: Can somebody who doesn’t know you tell you very specific things about your past that are true?
A: Yes.

How can they do this with such uncanny accuracy? Do they really have a ‘psychic gift’? No, the greater liklihood is that they have opened themselves up to receiving information from the spirit world. Keep in mind that demons have been around for a long time. There are demons who know details of the lives of every one of your ancestors who they have watched live and die. But why would you ever want to listen to anything spoken by demons who hate you and want to see you fail, reject God and his gift of everlasting life? Satan and his demons know that their fate is to spend eternity in Hell so their resentful, angry, hateful objective is to take as much of God’s creation with them.

Q: Can anybody tell you what is going to happen to your tomorrow?
A: No, not with any statistically valid results atleast….but many so-called ‘psychics’ will guess about what it is that you want to hear, for a price of course. Who calls these psychic hotlines? For the most part I’d have to say that people who do not know God or his Word, or people who live in fear of tomorrow. Any type of psychic is the same thing as a ‘medium’ as spoken of in Deuteronomy 18:10-11 at the very top of this page. 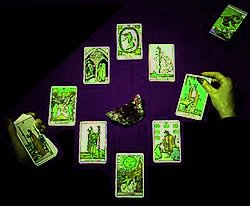 Tarot cards are just another method of ‘divining’ the future. While searching the terms ‘Christian’ + ‘Tarot’ I discovered an abundance of false teaching and false claims that its ok for Christians to seek advice from psychics, to visit a palm reader, or to try and see into the future by using Tarot cards. I even came across one self-professed Christian who said,

“We all have some fear about how our lives will wind up in the months or years ahead, and reading Tarot is only *one* way to allay those fears.”

So here again we have evidence that Fear is a common motivation for people to satisfy their desire to know what is going to happen in the future. Jesus says,

Matthew 6:34
Therefore do not worry about tomorrow, for tomorrow will worry about itself. Each day has enough trouble of its own.

Isaiah 47:13-15
All the counsel you have received has only worn you out! Let your astrologers come forward, those stargazers who make predictions month by month, let them save you from what is coming upon you. Surely they are like stubble; the fire will burn them up. They cannot even save themselves from the power of the flame. Here are no coals to warm anyone; here is no fire to sit by. That is all they can do for you- these you have labored with and trafficked with since childhood. Each of them goes on in his error; there is not one that can save you.

The scripture above states clearly that the advice of astrologers is worthless…so don’t be a sucker. What more needs to be said?

Other Occultic Subjects to be covered at some point include: