You are here: Home / Archives for beast of revelation 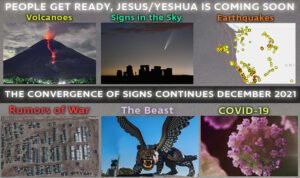 This Month’s Convergence of End Times Signs Includes, but is not limited to: