You are here: Home / Archives for Palestinians 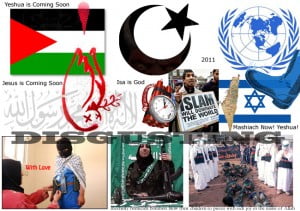 So the BIG question is whether Syria will feel threatened enough or justfied enough by Israel’s deeper incursion into Lebanon to directly attack Israel. So far, Syria has been using the terrorist organization called Hezbollah as their instrument of harm against Israel. It still ceases to amaze me how the world press reports that Israel’s response is overblown. What other county would tolerate being the target of terrorist rockets from across their border year after year? I’ve always been surprised at Israel’s patience in not being more proactive in their response towards the daily attacks of their enemies. Well it looks like their patience has run out… so far over 300 have died in Lebanon and 29 in Israel. If Syria, or for that matter Iran, becomes directly involved in this conflict then there will be little doubt that the tiny little country of Israel will have no choice but to resort to the use of nuclear weapons to assure her survival. Then the prophecy of Damascus, Syria being utterly destroyed will finally be fulfilled (Isaiah 17:1) . The temperature is rising, it’s getting hotter everywhere.

SOME FACTS ABOUT ISRAEL

THESE ARE TRYING TIMES. WE MUST ASK OURSELVES WHAT WE SHOULD BE DOING,
AND WHAT WE WILL TELL OUR GRANDCHILDREN ABOUT OUR ACTIONS DURING THIS
CRISIS, WHEN WE HAD THE CHANCE TO MAKE A DIFFERENCE.

START NOW!  SEND THIS MESSAGE TO 20 FRIENDS, AND ASK EACH OF THEM TO SEND
IT TO 20 MORE.

JEWISH OR NOT, IT DOES NOT MATTER.  EVERYONE SHOULD KNOW THE FACTS.

TRUTH AND PEACE ARE VALUES COMMON TO ALL OF US.

The arabic word for martyr is shahada. Many of you may not yet know that the Palestinians teach children as young as 8 years old the art of guerilla warfare and indoctrinate them with the idea that they must kill Israeli civilians to liberate Jerusalem and Palestine. Will the world condemn Israel for defending themselves against children with rockets and automatic weapons? I expect the photos that the world will see will be of dead Palestinian children after their Kalishnikov rifles have been pried from their hands.

A question that I keep asking myself in light of this developing war on terrorism is, “What is the worst-case scenario?”
The answer that keeps ringing in my ears is that despite the best efforts of our government, this is going to turn into a religious war against all of Islam. There would most likely be many Muslims who distance themselves from the violence, but many who ally themselves with their terrorist Muslim brothers against a perceived assault on their religion. Who could you trust? All muslims would be suspect. Of course, there has already been plenty of talk about internment camps. Sacrificing the rights of the few for the safety of the many. 6 million muslims in America is a lot of people. How many people have to die before the world acknowledges that there is only one true God who is ‘knowable’, and that the Devil is behind all of the other religions of the world? There is hope…Jesus Christ is coming back very soon to put everything in order. But not until after the world goes through a time of trouble like it has never seen before.

President Putin of Russia has agreed to allow the United States to use nuclear weapons against Osama bin Laden. Of course there was a price for his agreement, which was allowing Russia to use nuclear weapons against the Chechens without interference if Russia decides to do so. One news source today stated that Osama bin Laden is the most popular man in all of Islam today. Naturally, our only course of action as a nation is to seek and destroy this man and as many of his followers as possible. There would be no peace otherwise, for their objective is to destroy Western civilization. This looks like a no win situation, because there will be thousands of other terrorists throughout the world who must be dealt with after Osama is confirmed dead. Its hard to imagine anything getting better before it gets worse. If you don’t yet know Jesus Christ, call on his name, ask him to reveal himself to you through his word in the Holy Bible, and begin reading the Gospel of John today.