You are here: Home / Archives for souls

To Those Left Behind:

I am writing this letter September 20th of the year two thousand, prior to the events I believe are now unfolding before you:

Such scenes of war, natural disaster, raping, murder and devastation as has never covered all the face of the land at one time in all the history of the earth. The great war lord lays waste all in his ever-increasing path, the very report of which sends terror before him. The earth herself mourns as her children reap death in such number, there are not enough left to bury the dead, bringing plague and pestilence of every order to her seemingly few remaining inhabitants. The wicked slay the wicked in every increasing number.

To cleanse herself, the earth erupts forth with spontaneous vapors of smoke and tongues of fire to quell the stench of death which distills as a mist upon her. Whole cities are swallowed as the earth opens her mouth to receive them and mountains flow down to cover the wickedness of man against man. Smoke and vapors hide the light of the sun and the moon and stars seem to have fled, hiding their light from the shame that covers the earth.

Voices heard from on high lament the state of the world as winds and fires and lightnings and thunders, the sea heaving herself beyond her bounds, and all manner of upheaval are sent forth to testify against the inhabitants of a world who have forgotten their God.

Where is the glory of Rome? How falleth modern Babylon? Where now are thy idols of clay and brick and iron, ye who have worshipped the workmanship of thine own hand? Where can ye buy safety with thy gold and thy silver?

Now hear the voice of He who sits enthroned on high–even a voice of earthquake and tumult and death. Each of the seven angels has sounded his trump and poured forth plague upon a wicked world.

Yea, Babylon hath fallen, hath fallen, and the merchants of the earth mourn. The seventh seal is opened and the wicked are gathered into the garners to be burned. APOCALYPSE NOW!

“Oh, God of Heaven, whose left hand pours forth the plagues spoken of by all thy holy prophets of generations past; and who, by thy right hand, hast withheld thy fury from those who loved thee, who were caught up to meet Thy Beloved Son in His cloud, the Holy Shechinah! They pray for you who are left upon an earth of torment and agony.

May you yet recognize and acknowledge the God of Heaven and His Son, even Jesus Christ–the Promised Messiah! May you yet acknowledge thy transgressions and give away all of your sins in this the final hours, that even if you must suffer the pangs of death upon the earth; your souls may yet be saved in the world to come! 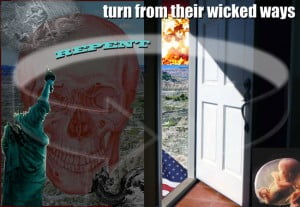