You are here: Home / The Rapture / What is the Rapture Anyhow? 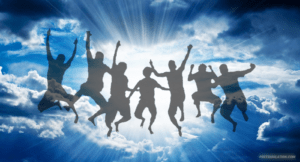 The Rapture is an event where the groom comes to take his bride away, to be married to her forever.  Seriously, that’s what it is.

Only the groom is the Messiah, the Son of God, better known as Jesus or Yeshua, and the bride is not a single person, but all people who corporately believe in Jesus and trust him, male and female alike, living and dead.  The bride is better known as ‘the church’.

This supernatural event is not to be confused with the Second Coming, which happens after the Rapture, when Christ returns to defeat his enemies in Israel; namely the anti-Christ, the False Prophet, and everyone else who foolishly believes that they can fight and defeat God himself.

The Rapture is a rescue story, known as the Blessed Hope…which is the hope that all believers have, or should have, that their Savior is coming to rescue them from hell that people who remain on Earth will experience for a 7 year period of time known as The Tribulation, if they even survive it, for 2/3 of all mankind will perish, either at the hand of the anti-Christ who will tirelessly persecute and work to exterminate both Jews and new converts to Christianity, or as a result of God’s wrath that is unleashed upon earth in biblical proportions; earthquakes, tsunamis, hail storms, fire, a meteor impact,war, even nuclear war, violence, disease, famine, wild animals and more.  The Bible says if these days were not cut short all mankind would perish.

Scoffers will come in the last days, walking according to their own lusts, and saying, “Where is the promise of His coming? For since the fathers fell asleep, all things continue as they were from the beginning of creation.”

While the word ‘Rapture’ itself is not in the Bible, it’s Greek equivalent is.  You see, the New Testament was written entirely in Greek and later translated into Latin and English.  The Greek word is ‘harpazo’ and means to be plucked out, taken up or snatched away quickly.  Harpazo translated into Latin is ‘rapio’ from where we get our English word ‘Rapture’, however, in the Bible it is usually translated as ‘caught up‘.

The Comfort of Christ’s Coming

But I do not want you to be ignorant, brethren, concerning those who have fallen asleep, lest you sorrow as others who have no hope.  For if we believe that Jesus died and rose again, even so God will bring with Him those who sleep in Jesus.

For this we say to you by the word of the Lord, that we who are alive and remain until the coming of the Lord will by no means precede those who are asleep. For the Lord Himself will descend from heaven with a shout, with the voice of an archangel, and with the trumpet of God. And the dead in Christ will rise first. Then we who are alive and remain shall be caught up together with them in the clouds to meet the Lord in the air. And thus we shall always be with the Lord. Therefore comfort one another with these words.

Most all Bible translations use the phase ‘caught up’, but a few say ‘carried away’, ‘caught away together’, ‘taken in the clouds’, or ‘taken up together’.

So there you have it, when the trumpet sounds, those who belong to Christ will be given their new immortal bodies and caught up, or taken away to the Father’s house in Heaven for a royal wedding.

Do you think such a thing is difficult for God? The Creator of the Universe…